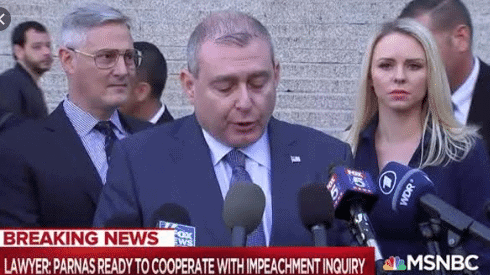 The Trump impeachment trial is occupying gigabytes of media bandwidth, but one of the surprise witnesses is Russian-born Lev Parnas who was questioned on Prime Time about his allegations, the man beside him was something of a mystery.

Parnas, an associate of Trump’s attorney Rudy Giuliani, is being advised by Joseph Bondy, whose law firm website touts him as a criminal defense and cannabist business attorney. (Pictured above with the spectacles).

Parnas has alleged that President Donald Trump, U.S. Attorney General William Barr and others were fully aware of his work in Ukraine to secure the announcement of an investigation into Democratic presidential hopeful Joe Biden, using aid appropriated by Congress as leverage.

Despite Trump denials about even knowing Parnas, Bondy has been releasing…